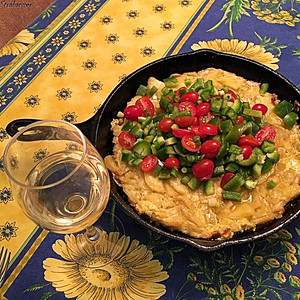 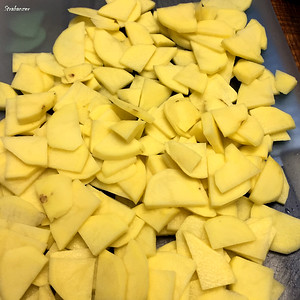 About 1 ½ cups extra-virgin olive oil (This varies depending on the size of the pan and the amount of potato slices. I used close to two cups, but the oil can be saved for re-use)

Peel potatoes and halve them lengthwise.

Pat potatoes dry with a dish towel or paper towels.

Place a large skillet over medium heat and warm through.

Add oil, then add potatoes and onion. (You need enough oil to almost cover the potatoes, so adjust amount according to your pan size.)

Cook until potatoes are just tender enough to cut with a fork, 10 to 15 minutes, adjusting heat so vegetables do not burn or take on too much color.

Using a slotted spoon, transfer potatoes and onions to a colander set over a bowl and let cool.

Reserve 3 ½ tablespoons oil from the skillet to use for finishing the recipe. (You can reuse the rest of the remaining oil, too; store it in the refrigerator.)

Heat 1 tablespoon of the reserved oil in an oven-safe 8- to 9-inch nonstick skillet over medium-low heat. (NYT recommended 2 TB, but this was a bit much. Check how much oil remains on the potato/onion mix).

In a large bowl, whisk eggs and season with ¼ teaspoon salt and ¼ teaspoon pepper.

Fold egg into the potato mixture making sure it is spread over all.

Pour mixture into pan and use a spatula to flatten out surface.

Cook, using spatula to occasionally loosen eggs from edges of pan, until top is almost set, with just a small amount of liquid remaining, about 5 minutes.

Transfer to oven and cook until top is just set, 5 to 7 minutes longer.

Slide tortilla onto a plate. (I had cooked in a rather nice cast iron skillet, so I served in that).

In a large bowl, toss together tomato, pepper, scallion, garlic.

Season with salt and pepper.

Top tortilla with salad and serve warm or at room temperature.